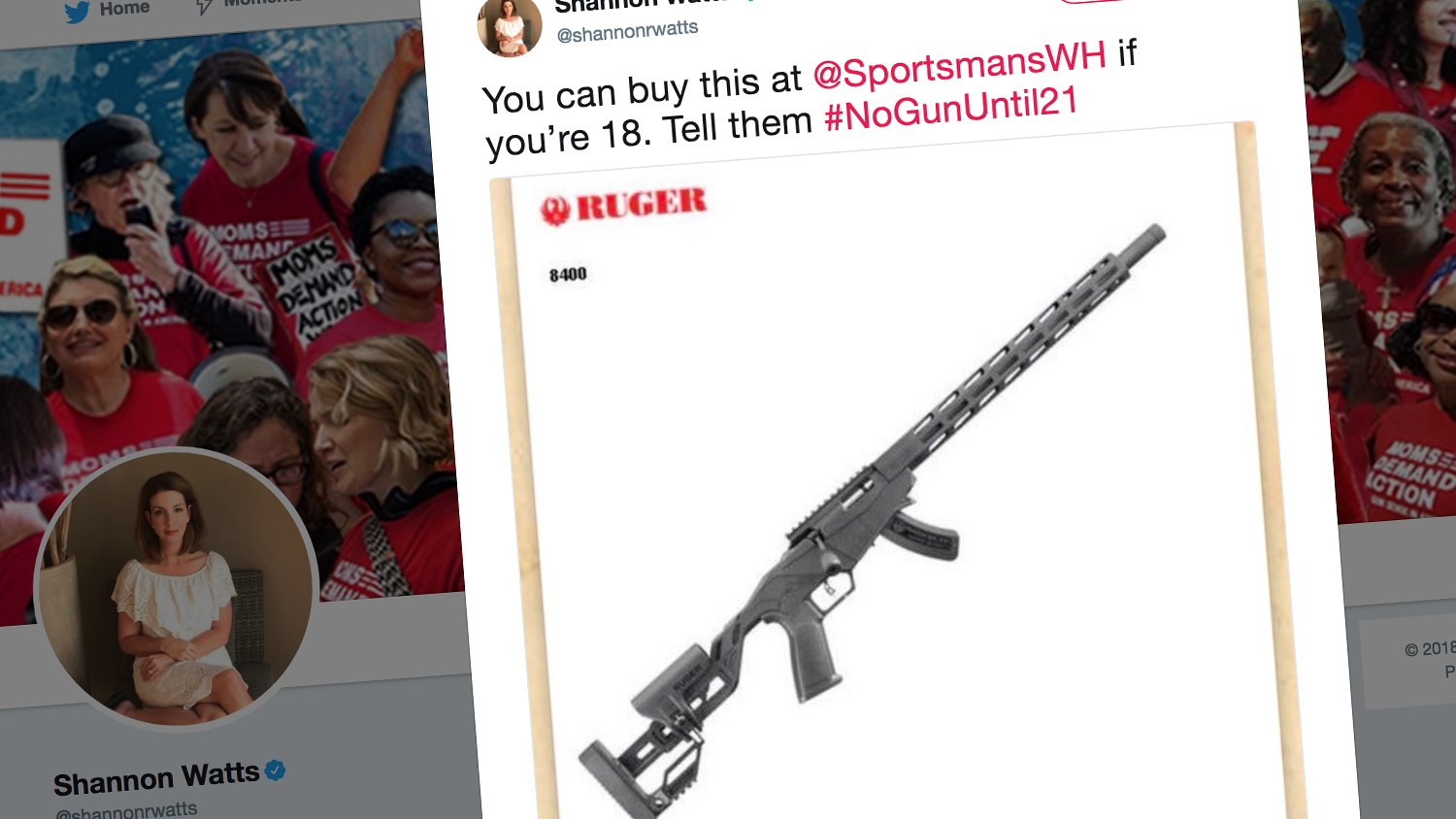 On March 2, gun control über matron Shannon Watts issued a tweet taking the online retailer Sportsman’s Warehouse to task for making a certain firearm available to adults as young as 18. No doubt Watts hoped to shock her Twitter followers with the gun’s supposedly menacing appearance.

The rifle she depicted, however, was a Ruger bolt action .22 rimfire, a platform that has safely introduced untold numbers of preteens to the fundamentals of marksmanship and firearm safety, including through programs at summer camps, scouting organizations, and even some public schools. It is a platform so common and uncontroversial, in fact, that it would remain untouched by even the most far-reaching “assault weapon” ban introduced in any American jurisdiction to date. The large knob protruding from its action must be manually operated between shots, and the ammunition it uses is among the mildest of the commercially available rifle cartridges, illegal for taking game bigger than a squirrel or rabbit in most places.

Needless to say, this was all lost on Watts, who was manifestly reacting to features of the particular model in question that have absolutely nothing to do with any lethal potential it might possess. These include its dark color; its polymer furniture; the adjustability of the stock’s comb and length of pull; its vented, free-float handguard; and its accessory rails. Leave it to Watts – who recently lectured a crime victim on her supposed “privilege” – to be triggered by mere appearances.

Of course, it’s also possible that Watts knew exactly what sort of gun she was tweeting a picture of and was simply making the point that there’s no firearm too benign for her regulatory ambitions.

Either way, Shannon Watts once again made herself look ridiculous to anybody with a basic understanding of firearm technology, if not basic common sense.

That might be forgivable for the average suburban adult with no prior firearm experience who knows no more about guns than their dubious depictions in mass media and entertainment. But it’s a pretty sorry showing for someone whose only claim to fame is imperiously hectoring the rest of the country on the evils of guns and gun owners and pushing prohibitory firearm policies and laws.

Indeed, of all the manifestations of childish entitlement that characterize the gun control lobby, perhaps none is so pronounced as the inverse relationship between their ignorance and their outrage. It’s of course easy to fear something you don’t understand. But gun control advocates take it a step further, resisting attempts by gun owners to set them straight on the facts as a form of “bullying” or mocking efforts at education on firearms as “gunsplaning.” Then they go further still by insisting that not only should their obliviousness inform their own choices about firearm ownership and use but yours as well.

And while their ineptitude might be a source of amusement to gun owners to the degree it’s confined to social media rants, there’s nothing funny about its very real potential to infect public policy as well.

Firearm technology can no doubt seem bewildering and intimidating to the uninitiated. And gun owners should have patience and sensitivity to those who are trying in good faith to come up to speed.

Watts and her likeminded Twitter followers, however, aren’t just uninformed. They are deliberately indifferent, if not actively hostile, to any fact that gets in the way of their agenda.

So don’t expect embarrassment or apologies from Shannon Watts. She doesn’t actually have to know what sort of gun she’s talking about to “demand action” to keep you from having it.